The Dordogne remains one of the most beautiful and unspoilt parts of South-Western France. Its sweeping countryside is home to a great deal of beautifully preserved towns and villages and cultural attractions. You can choose to visit prehistoric cave dwellings, vineyards, bustling cities or peaceful villages. You can walk or paint or enjoy sampling local delicacies at vibrant markets. Or you can just laze in the shade at your cottage, reading and napping in cool rooms bathed in summer sun.

Dordogne transforms throughout the year, changing with the seasons. During summer the temperature varies 25°- 35°. Spring and autumn both benefit from temperate weather with only a slightly higher chance of rain. Cold weather spells (when temperatures can drop to -10°) are usually limited to December and January, making holiday cottages in Dordogne inviting throughout the year.

In the north of the département lies the regional capital Périgueux, a beautiful city of Roman origins with medieval and cathedral quarters. Nearby, the attractive towns of Brantôme and Bourdeilles span the River Dronne. Meanwhile holiday cottages in the region of Hautefort offer fine views over the picturesque Périgord countryside.

But it is the River Dordogne, to the south, which lends its name to this French department. Rising in the Massif Central to the east, it widens and cuts through the landscape, looping and twisting past rocky outcrops where ancient bastide villages clustered for defence.

Visitors to this area can enjoy the tobacco and sweet white wine that Bergerac is renowned for.

The jewel in the crown is Sarlat, which lies at the heart of the Dordogne valley although not on the river itself. This well-preserved town, with its golden stone buildings, twisting lanes and great food market is the perfect retreat for a holiday cottage. Dordogne is also home to the legendary stoned villages of Monpazier, Rocamadour, La Roque-Gageac and Domme, which boast striking and unique architecture. 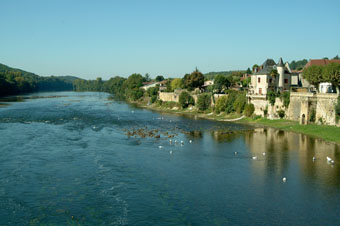 Dordognes most precious treasure, however, lies hidden from view in caves along the Vézère valley. Nearby, bison, elk and horses gallop across the walls but, sadly, for their preservation are not on public view. Visitors are admitted to a faithful replica on the same hillside. At Les Eyzies, the original cave paintings and engravings can still be seen.

As well as sightseeing, holiday cottages in Dordogne are perfectly located for many outdoor activities. There are trails for walking, horse riding and various forms of cycling, but argubly the best way to explore the Dordogne is by water and there are countless opportunities for hiring canoes at various locations along the river.

The Lot largely reflects the ancient province of Quercy, to the south-east of Périgord (Dordogne), and remains relatively untouched by industry. The countryside varies from wild limestone plateaux called causses, dotted with juniper bushes, small oak trees, to the rich valley of the River Lot. There are many caves and other geological features in the area: certain rivers that flow through the département have created dramatic canyons, and of particular not is the chasm at Padirac — one of the largest in Europe and an unforgettable visit. 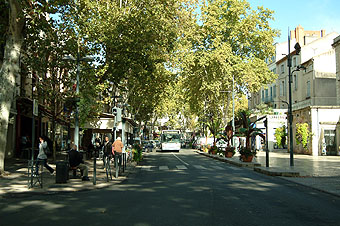 Prehistory left a collection of famous cave paintings at Pech-Merle, where a museum now elaborates on Stone Age existence. The subjects covered include food gathering and chipping flints to the metalwork of the Iron Age.

Medieval times gave us the cliff-side pilgrimage site of Rocamadour (with its cult of the Black Virgin and a museum of sacred art), and the picturesque St-Cirq-Lapopie, where community of artists and artisans thrives. Another must-see is the fantastic, rustic architecture of medieval Carennac, on the River Dordogne.

Cahors prime landmark is the spectacular pont Valentré over the River Lot. It was begun in 1308, and remains one of the best examples of a fortified bridge anywhere. It is also the source of many a myth and fable — most famously that the Devil was largely responsible for its construction. 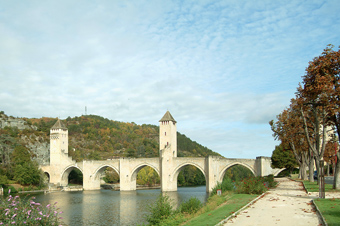 Another notable town is Figeac, in particular for the Egyptology museum in the birthplace of Jean-François Champollion, who decrypted the Rosetta Stone. It is also classified as a Town of Art and History by the French National Office of Historic Monuments.

Other interesting visits include the museum of automatons in Souillac, the Jean Lurçat museum at St-Laurent-les-Tours (Lurçat came to live in the Lot in the 1940s) and the Ossip Zadkine museum at Les Arques. There are several impressive châteaux in the region, including those at Cénevières, on the edge of a cliff overlooking the Lot Valley, and at Castelnau-Bretenoux: overlooking the rivers Céré and Dordogne, it is a beautiful example of medieval military architecture and the boundary stone of four provinces: the Périgord, Limousin, the Auvergne and the Quercy.

Gastronomy is a way of life in the Lot: local delicacies include Cahors wine, goose and duck confit, foie gras, truffles and little round goats cheeses called cabécou. The Lot owes its history to wine: barges used to take most of the wine to Bordeaux, where it would be loaded onto ships to the rest of Europe.